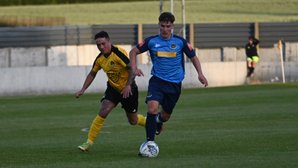 The Hornets looked sharp throughout the game, and Olly Martin's early effort proved the difference at The Wanted Stadium.

With 10 on the clock, Amar Purewal and Martin combined on the left flank for Hebburn however Joe Walton headed the cross wide of the back post.

Seconds later, Oliver Walters' cross was scrambled out to Sean Reid, who skillfully found Martin to poke home at close-range.

Daniel Moore's men instantly searched for a second, with Liam Murray forcing ex-Hebburn shot-stopper Andy Coulson into a brilliant save from distance.

Coulson was in action against for West Auckland on 25 minutes, denying Reid a marvelous chance from 20-yards.

The game slowed down in the second period, with a trialist and Reid swinging efforts towards West Auckland's goal but Coulson stayed firm.

With 15 to go, West almost equalised as the ball was chaotically half-volleyed off the crossbar from 25-yards.

At the other end Murray played a short free-kick to Will McCamley, with the former Shildon winger curling a shot narrowly wide of the far post.

Dan Groves committed a foul on Leon Scott in the closing stages, however Jordan Blinco slashed the free-kick wide from the edge for the hosts.